I realized this the other day…. but then another thing occurred to me, it is actual practice. Constant, unending practice.

When we are working on a new song, whether it is on our own or together, it is a process, a long and sometimes arduous process.

The right tone, the well-placed harmony, the just-right phrasing all make a huge difference in a song. You may not know what it is, but you know when it’s right. It is the difference between ‘they do this song’ and ‘they nailed it’ — we prefer the latter.

One of my favorite moments is during a wedding ceremony, Jack playing ‘Your Song’ by Elton John on the acoustic piano as a gift from the Groom to his Bride; watching the tears well-up in the Bride’s eyes and then freely flow; seeing the huge grin on the Groom’s face as he realized he had just given her such a wonderful moment; then the cherry on top – going through the receiving line after the wedding and having the adult son of the Bride, who happened to give away his mother, grab Jack, hug him and say ‘f***ing awesome, you were just f***ing awesome’ 🙂  Colorful yes, but still qualifies as: one of the Best. Compliments. Ever. 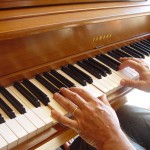